Blinky was an unusually friendly one-eyed gator who won the hearts of Lakeland in the 1970s. Occasionally Blinky would take a short stroll in the downtown area, but would return to regally lie on the concrete ramp that reached toward the center of Lake Mirror. Mecha-Blinky, made of mechanical junk, now sits in one of his favorite sunning spots on Lake Mirror, and a traditional Blinky statue sits in the town’s outdoor kiddie splash pad at Barnett Family Park.

The large and gentle original Blinky was a resident of downtown Lakeland’s Lake Mirror. Blinky could be seen almost daily, laying on a long concrete ramp that went into the lake from the former Lakeland Light Plant. As the official mascot of the City of Lakeland Chamber of Commerce through the 60’s and 70’s, winter visitors were thrilled by his presence, sunning daily in an urban setting. Named for his one eyed condition, at almost thirteen feet and 600 lbs., Blinky was destined for immortality. 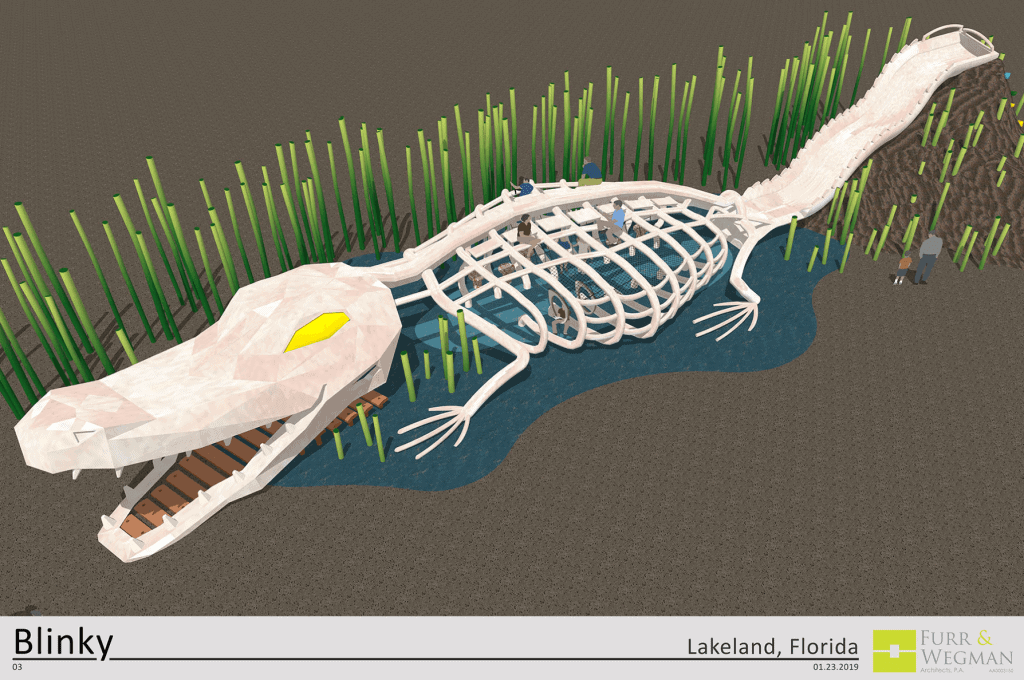 Local Architect, Michael B. Furr and his team, have proposed bringing Blinky back to bigger than life form for future generations. Kerry Falwell, Executive Director at Explorations V Children’s Museum, was presented with the design concept for a 100 foot long Blinky that can best be described as phenomenal. He is proposed to be located in the design yard at the entrance of the new 40,000 sq ft Children’s Museum, being constructed in Bonnet Springs Park. Featuring sounds, lights, a thirty foot slide, and a world of imagination, this iconic creature will anchor the center of Bonnet Springs Park.

A stroll through this unique botanic garden takes you on a journey that engages the senses. Each garden offers themed plant collections that are unique to one bodily sense—taste, touch, sight, smell, and sound. While they represent diverse experiences, these spaces are unified in their celebration of discovery, art, and culture. When emerging from the Event Center looking south, your gaze is slightly elevated above the gardens. A view unfolds across a gently sloping hillside of waving textured groundcovers, lush seasonal blooms, shady tree groves, and walking paths winding throughout.

Immediately in front of you lies the first sensory journey—the Kitchen Garden—which traverses three stepped terraces and descends into the larger garden. Each terrace contains raised planter beds with vegetables, herbs, small fruit trees, and a large farm table to suit a variety of gatherings. They are organized according to geographic origins of the edible plants, and provide abundant opportunities to learn about food through interpretive elements or seasonal programs.

Next, the main path takes you east across a bubbling water runnel where blue and purple hues reach out from the Blue Garden to lure you around the bend and into a realm of visual delight. Blankets of flowers create a cool blue oasis year round. This floral wonderland is dotted with blue art installations like tinted mirror panels that fade into nearby vegetation and blue bottle trees inspired by the cultural heritage of the site.

As you wind out of the Blue Garden, the path takes you west into the Tactile Garden, which contains both plants and interactive play elements that invite visitors to touch their myriad textures. Fluffy, flowing vegetation and woven structures fill this enigmatic space and imbue a sense of play and wonder. Right next door, you can smell the sweet scents of the Aromatic Garden. The unforgettable smells of jasmine, rose, and gardenia hang in the air above the meandering footpaths and garden beds.

Finally, you round the bend and head south past the wetland ponds where you can hear the faint sound of bubbling water and the hum of chimes. The Sound Garden is a space of play, creativity, and on a quiet day—reflection. Its array of chimes for children and adults are mixed into existing mature oak stands and ribbons of rustling ornamental grasses. The sounds of this garden mark the end of the Five Senses Botanic Garden journey, and leave you energized to explore the rest of Bonnet Springs Park.

Final preparations continue to be made as we finish up details so that we can open up our Founding Friends of Bonnet Springs Park Membership to YOU!! The opportunity to begin an organization from the ground up has been exciting for our nine-member board and much work has been done in the past six months.

We are thrilled to unveil to you our new Friends of Bonnet Springs Park logo. This includes a font that has been uniquely created by our Boston based park planners, Sasaki. You will see this font again on all the way-finding signage at Bonnet Springs Park.

Be on the lookout soon for YOUR chance to be a Founding Friend of Bonnet Springs Park!!

June 13, 2022
Behind the scenes with President Bill Tinsley Days are getting longer as summer engulfs Bonnet Springs Park. “We had a good day” is often heard… 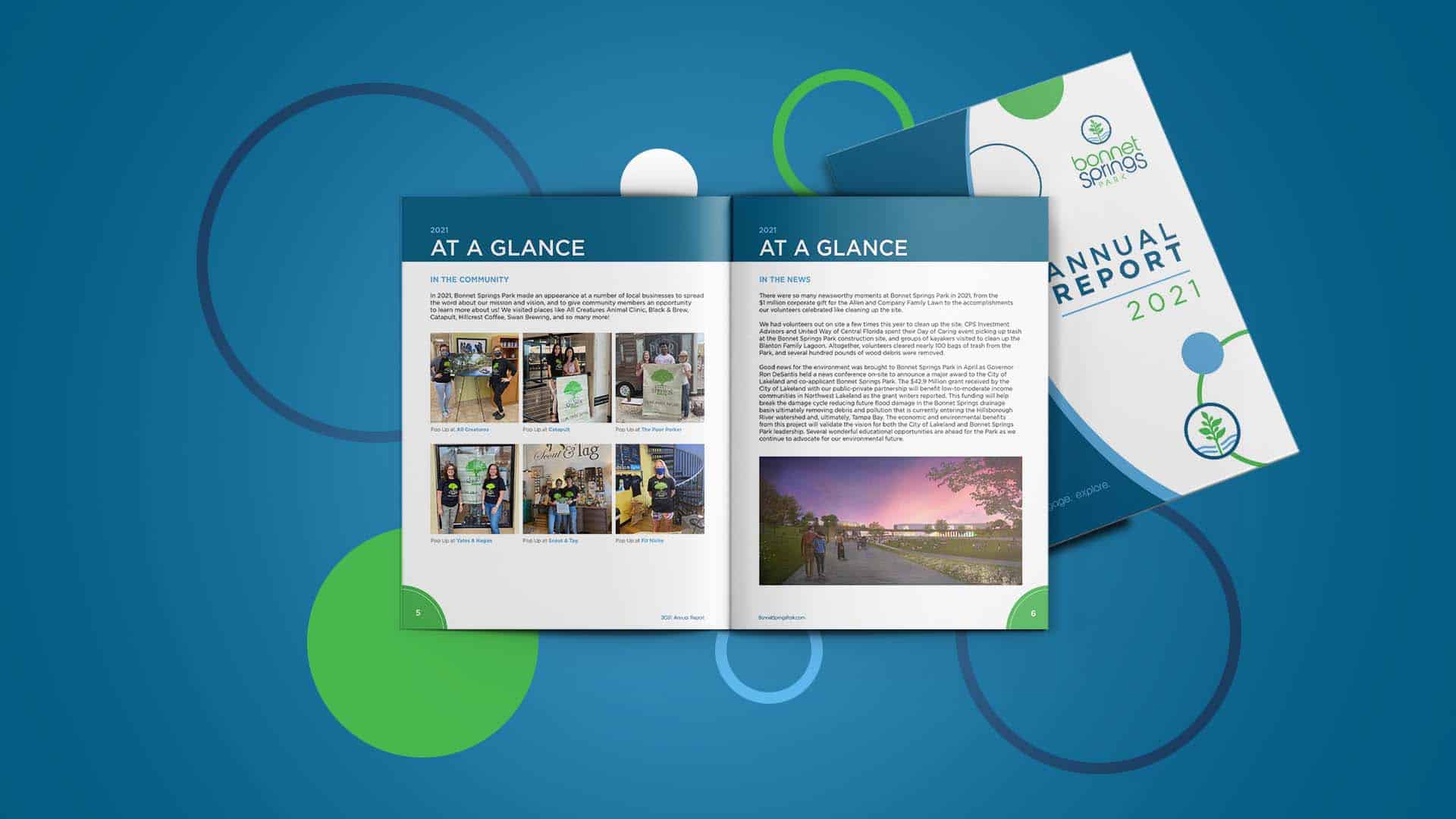 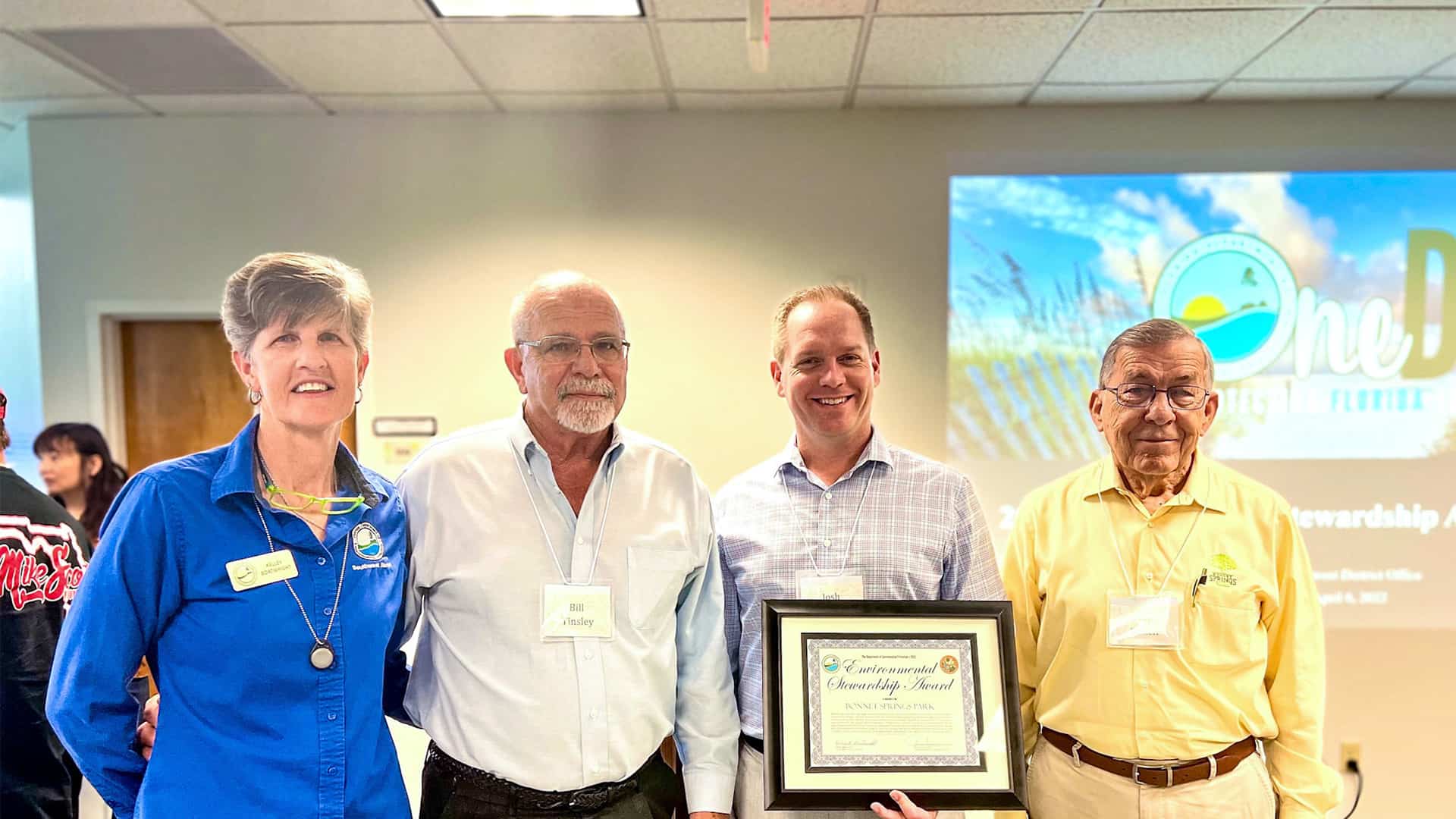 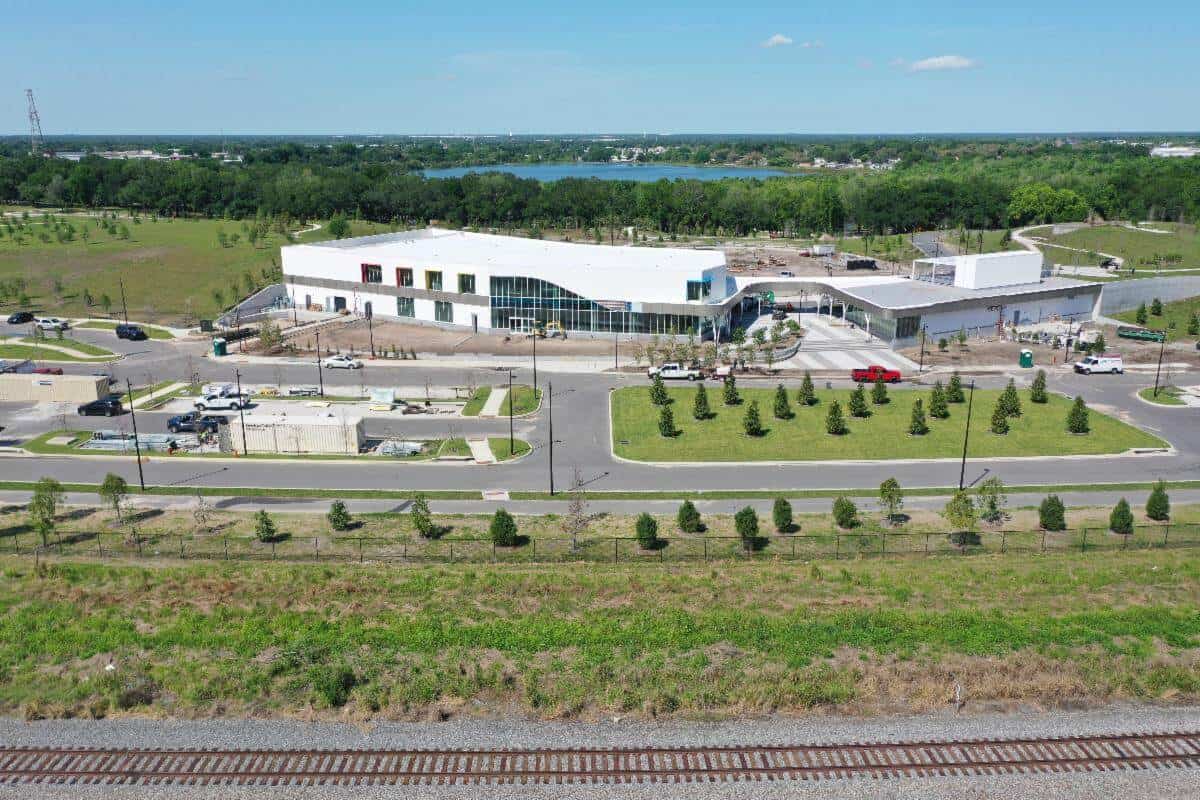 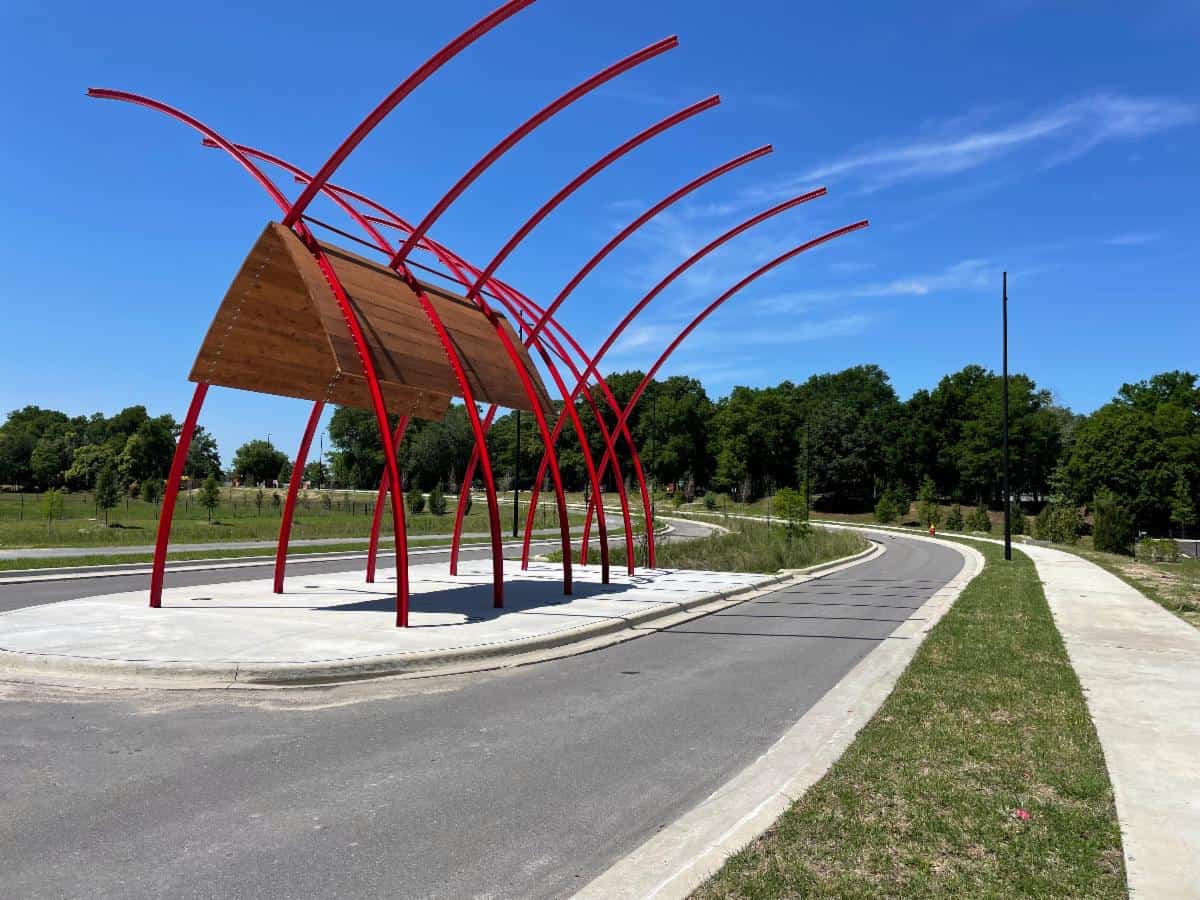